Giovanni Mancini was born in Guardia Sanframondi (Bn), on April 15th 1953. His parents, Maria Falato and Antonio Mancini, were from Guardia. They were farmers and used to take him in the fields so he began to explore a world made by bugs, fossils, roots and minerals, which he liked analyzing. His curiosity followed him for all his life. Since he was a child, he liked drawing. In 1966, he started to attend the Art School in Benevento where he developed his passion thanks to teachers like Nunzio Bibbò, Mario Persico, Mario Rotili, Rubens Capaldo etc.

During this period he works hard and he exposes his works in some exhibition, winning the prize “Premio ANSI” (BN).
In 1971, after graduated from high school, he joins the Institute of Fine Arts in Naples, attending the Sculpture class, with Professors Castelli and De Vincenzo. De Vincenzo will become his leader and there will be an emotional connection between the two of them that will last forever.

He falls in love with Naples’ artistic heritage and begins to study deeply the history of art of the Campania region. He understands how art spread in his territory. He wants to make people become aware of that heritage and founds a cultural association with a group of friends, called “Friends of Monuments” in order to protect the artistic heritage of Guardia Sanframondi, often exposed to the negligence of institutions. 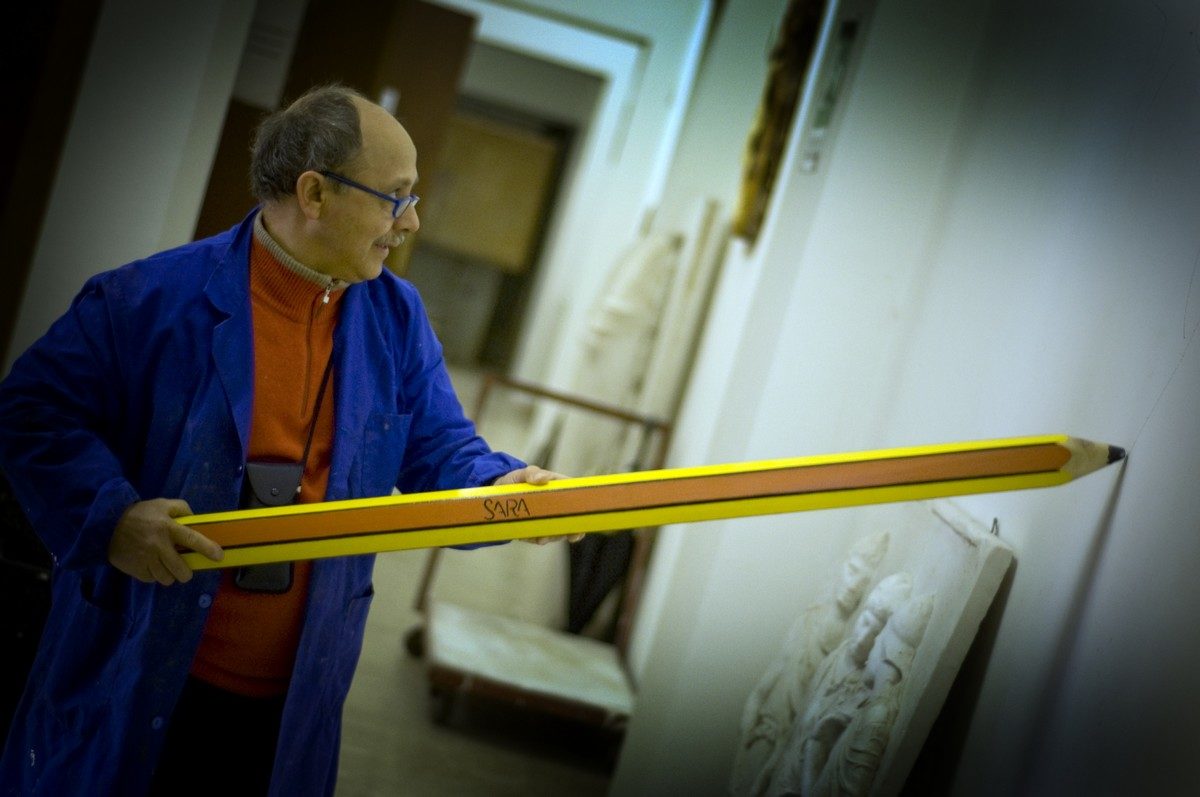 De Vincenzo follows him and pushes him to take part to organizations in Naples, Salerno, Caserta, Benevento and Milan at the Palace of Art “Fair of young artist”, organized by Mario de Micheli. After finishing his studies, he decides to become a professor, as substitute teacher in middle school and in high school of Benevento.
In 1977, he becomes professor of Techniques of sculpture at the Institute of Fine Arts in Catanzato. At the same time, he has been called as art conservator at Capodimonte Museum (Na), with a permanent contract. But he chooses to be a professor at the Institute of Fine Arts, due to his love for sculpture.

Here, he spends time with the dean Carmine Di Ruggiero, the professors Giovanni Pisani, Alfredo Scotti, Guglielmo Longobardo, Massimo Perez, Tony Ferro. He travels every week from Guardia Sanframondi to Catanzaro. During this travels by train often with his collegues, he develops several ideas and projects of work.

In Catanzaro he meets Caterina Tarantino, one of his students, they fall in love and got married in 1980. They will have two kids and will stay together until the end. During this period, he analyzes the research on the materials and on the new technologies. He keeps up with the new products and likes to experiment everything. This is an important period for his artistic production.
In 1990, he moves to Frosinone, from 1996 to 2006 he moves to Rome, in 2007 he goes back to Frosinone. In 2010, although keeping his job in Frosinone, the professor Giovanna Cassese offers him the class of Marble and Rock Techniques for the art conservation at the Institute of Fine Arts in Naples. It is his dream to be able to go back to where everything started, at the Institute in Naples.

He loved art so much that became a part of him. He lived for art and tried to pass down his passion to his students. It made him feel free, without prejudices or obligations. His students attended his classes enthusiastically. During his lessons there were more and more students, everyone stopped to attend his class and asked him for some advice about their works. He was always ready to give explanations, he enjoyed to give his knowledge to his students.

In 1997, he buys with his wife a piece of an ancient palace and restore it and it becomes the expositive place “DOMUS MATA”, Museum of arts and traditions. His last wish is to organize artistic events, giving the opportunity to make culture in a wonderful place. He managed to host only two events: a retrospective of his teacher Giovanni De Vincenzo, and a union of students of the Institute of Fine Arts in Naples.

After the SLA forces him on a wheelchair, he keeps on teach in Naples, and lives his illness with dignity.
Diceva nell’ultimo periodo “non ho più tempo. Il Padre Eterno ha bisogno di me! Devo andare!”
During his last period he kept on saying: “I don’t have much time, the heavenly Father needs me! I have to go”!
He passed away on January 2nd 2016.